If you have been to a wedding ceremony in the past few years, you may have witnessed the couple having their hands tied together with ribbons or ropes. This custom is called Handfasting, and it became popular early in the 21stcentury. However it has roots which go back to he 12th century in England and Scotland. It is the origin of the phrase ‘Tying the knot’ and is very popular with modern couples who love the romance and meaning behind this ceremonial joining of their hands. 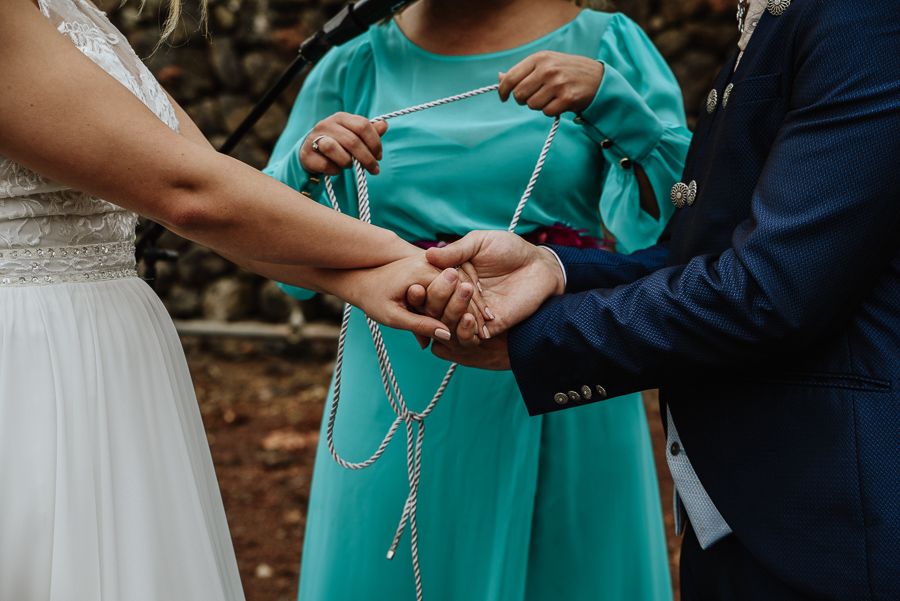 The History of Handfasting

In Scotland, Handfasting was seen as a solemn commitment to marry, but it also gave those who undertook it a year to change their minds! The couple would undertake a ‘temporary marriage’ of a year. This would be seen as a serious and legally binding contract, and the couple would have two witnesses with them to solemnise their commitment. If they still wanted to be joined ‘by the bonds of matrimony’ after a year of their probationary marriage, they would then have a formal wedding later. This was not a particularly fair arrangement as the onus was on the woman ‘to please her man well’ during the year. As you can imagine this often led to clan disputes and fell out of practice around the 17th century when church weddings became more popular.

In England, the handfasting was seen as an engagement to marry, and it was usually held about a month before the couple were due to marry in church, as a declaration of their continuing intention to wed. The ceremony could be held anywhere, indoors or outdoors, but was seen as a legally binding contract, only to be undone by death.

A modern handfasting ceremony can take many different forms, which I go into in more detail below. Handfasting is romantic and can take place either as a stand alone ceremony or as part of a full wedding ceremony. Many couples decide to have a handfasting as an additional blessing following a registrar service or church wedding. Independent celebrants like me are trained in the different ways of ‘tying the knot’ so that when your hands slip out, the knot which remains is an eternity knot and cannot be undone.

As an eco conscious couple, you will be aware of the importance of choosing ropes and ribbons which have been ethically sourced and coloured using biodegradable and non poisonous dyes. However, this is one of the most sustainable ceremonies a couple can undertake and it truly links you to the earth beneath you, the sun above, the wind which surrounds you and the water within. The words of this celtic blessing are as meaningful now as they were when written centuries ago:

Above you are the stars, below you are the stones.
As time passes, remember...
Like a star should your love be constant,
Like the earth should your love be firm.
Let the powers of the mind and of the intellect
guide you in your marriage,
Let the strength of your wills bind you together,
Let the power of love and desire make you happy
and the strength of your dedication make you inseparable.
Possess one another, yet be understanding.
Have patience with each other,
For storms will come, and they will go quickly,
Forced to dissipate in the light of your love.
Be free in giving of affection and of warmth.
Have no fear, and let not the ways
Or words of the unenlightened give you unease.
For your love is with you,
Now and always!

My thanks to Celebrant Kate for sharing this run down of Handfasting ceremony options - my husband and I had this symbolic ceremony as part of our honeymoon celebrations (a bit of a long story, which one day I will explain!), and I have to say, lovely though our legal ceremony was, it was the Handfasting that was by far the most meaningful!